If you spend any time at all on the water you will notice that there are several residents whose presence is less than ideal.  In a related article we have discussed the necessity or reality of sharing the waterfront with other creatures, namely spiders and bees.  In this article we will cover some others.  The seagull and the goose are but two of the many that populate the waterfront; however, they are two of the most annoying.  For the most part they keep to themselves, yet they have the unfortunate habit of using any and every space they encounter as their personal bathroom.

Chances are you may have encountered these birds/fowl or at least their evidence and often the only way to keep them off of your property is by running around and waving your arms.  However, this rather undignified method is also limited in its effectiveness as the gull or goose will simply move away and then return when you have gone about your business. 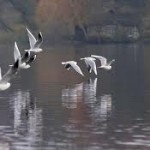 One of the best ways to keep these creatures off of your boat, lift, and dock is to install some sort of deterrent that will scare the birds off, and these, as we will discuss, tend towards three types.  Two of these use wind action to create their movement and thus scare away the offending birds, while the other prevents them from landing on your canopy.  We will discuss the cup style from Gull-B-Gone®, which is comprised of stainless steel cups set at the end of steel rods that spin on a central axis. Another type uses a flag or pendant set on a pole that creates a movement unpleasant to gulls and geese, and the third style from Gulls Away® uses transparent fishing line strung over the top of your lift canopy to prevent the birds from landing.  The Gull-B-Gone® and the Gulls Away® are designed specifically for your canopy, whereas the Dori Pole® is designed to work on dock and lake shore applications. 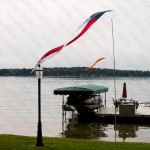 The pendant or flag deterrent from Dori Pole® is considered one of the most stylish systems available.  This system was developed initially as an advertizing method at festivals as the flags stood high above crowds and due to their bright coloration and versatility caught the eye, and it didn’t take long before they were used in providing an excellent medium for displaying information. These pendants have been in service for a while and it was noticed that birds tended to avoid the areas in which they were in place.The pendant or flag style of deterrent is a very versatile system; employed in land and waterway applications.  The pendent attaches to the end of a very long pole and can be installed anywhere that the pole can be properly inserted into the ground. 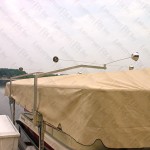 After years of trial and error and plenty of arm waving, the most effective method of deterring birds is still motion. Geese and gulls are skittish, they do not like erratic movement and shy away from areas in which all is not still.  So, a moving system is your best bet. The swiveling cup system from Gull-B-Gone® employs the wind to rotate its lateral arms and thus create the necessary movement to frighten any offending birds.

Theoretically this movement will also scare them away as they fly over looking for a nice place to land, that is, your canopy. The theory goes if they are afraid to fly over your boat lift they won’t crap all over it.  This system is very effective and you are probably familiar with its design.The system attaches to the uprights of your lift and extends out over the top of your canopy.  It will attach to round or square frames and comes as a set of two, with six extension arm and cup assemblies.

Given the mechanical nature of its design, that is, screws, pivot points, using natural elements, i.e. the wind, to move the arms, is prone to vibration over time. This vibration has been known to cause the set screws to fall out allowing the extension arms to detach. Another issue is that the vibration can cause the cups to twist, fill with water, and thus stop turning or sag and rest or rub on the canopy itself. However, it should be stated that these developments are a result of time; the system is effective but may not last as long as other systems.

The last system we will discuss is from Gulls Away®. This system differs from the others we have covered primarily in its method of deterrent. Both the Dori Pole® and the Gull-B-Gone® systems are “in motion” systems, using wind action to create movement and keep the birds away. The Gulls Away® system, on the other hand, could be called a “static” deterrent in that it does not rely on movement but rather obstruction.  The system consists of four uprights that attach to the corners of your canopy frame, extend above your canopy, and using transparent fishing line, are strung together in an X pattern.

This system works under the theory that if the birds can’t land then they can’t mess up your canopy. The Gulls Away® can also be modified, employing more rods and increasing the amount of obstruction, and making it an option for those with larger canopies, custom lift designs, or larger bird populations. 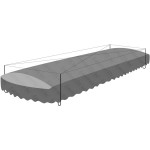 As with any solution there are benefits and detriments.  These systems have all been tested “in the field” and have all earned followers and detractors, either related to their functionality or design.  Some people are happy with the “in motion” designs while others prefer the simplicity of the “static” design.  The “in motion” deterrents are both encumbered by the same thing, when there is no wind their motion either diminishes significantly or stops all together, eliminating their effectiveness.  The static system however produces no motion so according to the formula “motion equals deterrent” this system finds fewer adherents, as it does not necessarily keep the birds from flying over and messing up your canopy.  The other major difference is versatility.

The Gull-B-Gone® and the Gulls Away® are both designed specifically for your boat lift; they attach to the frame itself and are not designed for your dock or other applications.  In this respect the Dori Pole® wins the race.  The Dori Pole® can be used in multiple applications and additional attaching options are on the way, allowing the pendant deterrent to be used on your dock and lift as well.

Keeping the birds off of your lift, dock, and waterfront is something that nearly everyone can get behind.  The systems we have discussed are designed to accomplish this and the choice of which system will work best for you is largely dependent on preference.  Each of these systems has specific qualities that will appeal to different people in different ways, and in the end the look of a system is as important as its functionality.  We have made it our job to provide as much information as possible so that you, our customer, can make an informed decision about how you outfit your boating and waterfront lifestyle.